I'm a big fan of the Korg ESX-1 Drum Machine (and, as a result, really hate the new ES-2). It was my main 'keyboard' and sequencer for my last tour, and I buy and sell them regularly. I recent sold my last one, and was aching for another - but didn't want to spend too much. Up on Craigslist pops up an "as-is" ESX-1 for $90, and I snagged it.

Here you see it in partially disassembled state. It reeks of pot. Every ESX-1 I've ever bought used has reeked of pot. Really? What's up with that?

Turns out the only real problems here are some shot encoders - and which Syntaur was happy to sell replacements. Those should be coming in today, and I'll probably have a working (but still stinky) ESX by the end of the week! Total outlay including memory card? About $130.

I stated earlier that I'm a bit of an East Coast lover - I always want at least part of my modular system to have a classic Moog-y sound. This was pretty easy with the 5U system, because that's the alter at which they worship. However, in Euro world, there is a lot more interest in West Coast (or sometimes 'tween Coast) synthesis, and so there's rather little that is super-East Coast focused.

I was going to provide a review, and this MW thread reminded me that I need to talk about it!

AJH is diving into East Coast synthesis in a big way, and I recently picked up the Mini Mod filter. It uses voltage rails that emulate the internals of the Minimoog, and a UI that combines both a ladder filter and a Moog-style audio mixer.

And the damned thing nails it for me. Its reactivity to modulation input has the right 'curl' to it - it's easy to dial in an AR or ADSR to get that growl in the CV response. The resonance whistles appropriatey, and the mixer overdrives in a really awesome way. I generally use it as a filter for my modified Pittsburgh filter, although it really makes a Braids light up in a great way. The filter is clearly East Coast - it's not that useful without a classic 80's oscillator set - but have a pair of oscillators screaming out a fifth and it is golden.

I'm going to buy some more of these modules; the contour generator is next (since I think that envelope will light things up even better than my Peaks filter...), and I'm curious what it'll be like in a year or so when I have an entire AJH voice...

(for what it's worth, other East Coast things I've tried are the Minitaur, the Macbeth Micromac R, the Macbeth X-series devices and the various Moog-like things by Doepfer and Analogue Systems devices. So yeah, I'm not a novice at trying this in Euro...)

Posted by Darwin Grosse at 7:38 AM No comments: 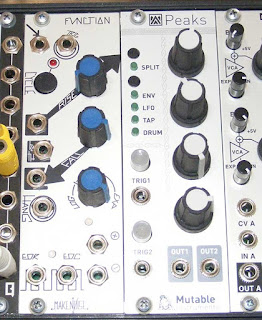 I got another module yesterday that I keep thinking I don't need - until I don't have one. That's the Make Noise Function, which is one of the great unsung tools out there.

I know it's not "Half A Maths" - I've got a Maths too. But there is something too useful about dropping this into an 8HP hole and getting a snappy envelope, trianglish LFO, trigger generator, slew generator, track-and-hold and other cool stuff.

In order to put it into my performance rig, I pulled one of my Peaks and replaced it with the Function. It's a killer addition, and one of my favorite little (8HP or less) modules, and I won't ever be caught without one again. 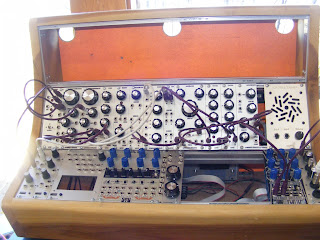 Well, after fishing out the ol' Goike case and using it to test drive the Tidal Wave, I decided that this was just the way to go for Modular #2. So I brought in the Teaching Rig (a Pittsburgh Foundation 2 system) and put it all in there - along with a C&G IIO module to make it really easy to monitor patches as I was working on them.

Fired it up and it sounds pretty cool. If nothing else, this will make for an expanded teaching rig - so I can show people some of the crazy as well as the bread-and-butter.

Something new in the house... 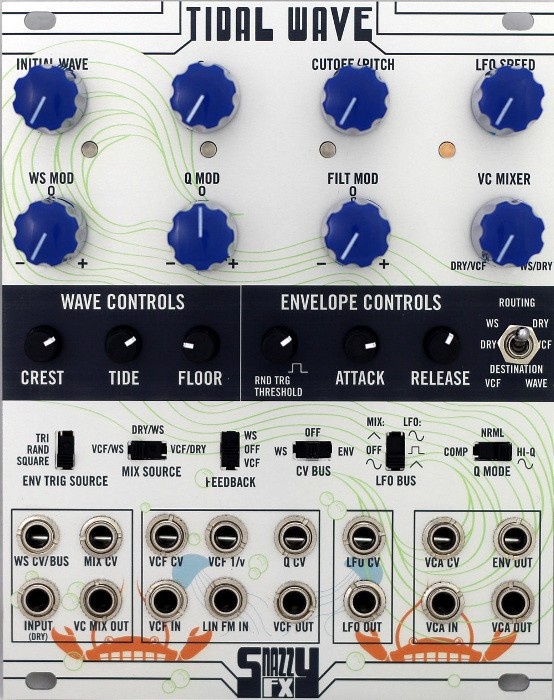 Something new showed up at the house today! It's gonna take a bit to wrap my noggin around this thing, but the idea of a "voice module" that isn't a straight East Coast voice seems like a pretty compelling idea. I'll play a little and report back. 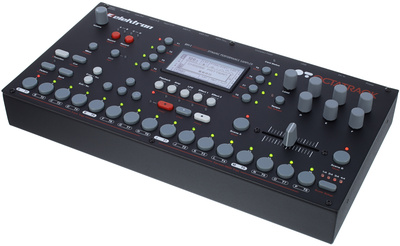 Maybe not as big as the Lebron decision, but more important to me...

I had a weird experience this weekend: I needed to quickly create the audio bumpers for my podcast, and quickly fired up Ableton Live. Dropped in an instance of ACE, and instances of my favorite drum kit and another polysynth, used some Mono Sequencer instances, and had a nifty track in about 10 minutes.

And, sadly, it sounded better than anything I've composed on the Octatrack.

I love the Octatrack for its compactness. I love it for its ability to toy with samples in unique ways. I love the plocks and the crazy scene/xfader system. I dislike the short sequences, the disconnected MIDI system and the remember-too-many-button-punches user interface. Love the Flex Machines. Really dislike the Pickup Machines.

I need your help. Talk me out of selling? Talk me into selling and refocusing on Live (and MFL devices)? Quit whining and enjoy my first-world life?

Prepping for the Shoot 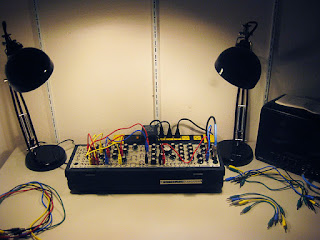 I'm working on a video series on synthesis, and am setting up a corner of the house to be a specific patching location. This way, I don't have to worry about setting up lighting and camera position every time I want to pump out a video.

Work continued today, with the Foundation 2 system wired and tested through a Yamaha MS-202 powered speaker. A couple of Ikea lamps will provide LED-based lighting. Next up is the installation of the MIDI keyboard and placement of the video camera mount.

I'd Forgotten How This Works

Yesterday, I went with my son to Microcenter to pick up a pile of parts that is going to become his new gaming computer. I was struck by how, given my limited knowledge of current computer hardware (too many years of Mac/laptop action...), doing this stuff was similar to what beginning modular users run into:


This effort reminded me to be thoughtful, compassionate and helpful when people ask me for help. FWIW, I could have really used a "Modular Grid for Gaming Computers"!

Oh Yeah - my other modular! 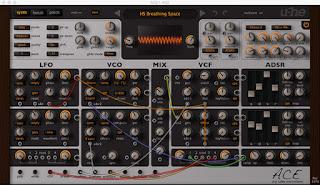 In exchanging email with Mark Mosher, who has been getting into u-he's Bazile patchable softsynth, I realized that I'd never mentioned my other modular, my real traveling modular:

It's super-simple, but it reacts the way I'd expect. It's got some quirks (i.e., NO FREAKING VCA'S????), but is fun as hell. The UI is - to me - preferable to Bazile because I can actually see it; it is contrasted right, and the controls are large enough to deal. I actually most often use it for percussion synthesis. I had been using Drum Spillage, but its kit system is sorta opposed to the Live Drum Rack, so I use ACE to develop individual drum sounds, then rack 'em up.