Today, I was paging through some old photo-SD card, and ran across a set of images from six months ago. I was in Europe post-Loop Conference, and spent a few days (with my friend and co-worker Gregory Taylor) in Paris. While there, I met up with another co-worker, Manuel Poletti, for a tour around IRCAM. It was an amazing experience.

I mean, for people like me, this is the equivalent of returning to ones homeland; so many of the tools I user for my personal sonic expression either came from IRCAM, was made useful there, or was first provided on affordable computers by technicians there. It was amazing to walk through the halls, peek into the anechoic chamber (pano view above...), check out the under-construction concert hall or sit in the 60-speaker mixing system. I came away with a major bit of inspiration with the work that they are all doing.

I'm looking forward to my next visit, but in the meantime, I can still bask off the glow of that visit. Just thinking about it makes me want to fire up Modalys...

So, the ol' corner-of-the-room that is my studio has been getting a little swamped with gear, and it was time to let the second-stringers move to new homes. I have to admit: I'm not much for 'extra gear'; when I have it, it seems to give me a level of stress that isn't useful at all. So I'm shooting off a few things for sale, and I thought I'm describe my experience with the three major places to see (at the moment).

Facebook Marketplace: This is the friendliest place to sell, and generally when I post something up for sale, I get a lot of likes, thumbs-up and smilies. What I don't get is many sales. It seems like, unless I'm promoting a fire-sale, it takes forever for something to move via Facebook. And it never sells without a lowball offer starting the discussion. The only good side? I can limit the sales to locals (my Twin Cities Synth Meet group), so at least a friend will get the bargain. Grade: C+

Reverb.com: Kind of the new kid on the block, a lot of people are pretty happy with this one. I just started using it, and it is pretty seamless. So far, I've sold two things, and have yet to see my money - they don't pay until the package has been deemed delivered, which kind of makes you a little concerned unless you buy the shipping label from them. The listing and sell-through process was pretty painless, although the process had its opaque moments. The jury is still out, but so far, it gets a... Grade: B

eBay.com: You know it, you probably don't love it, but it works - eBay is where stuff moves. It's gotten so much easier to list, the tracking information during the sale period (views, follows) is great, and when something sells, you get paid right away. Downsides? You'll get attempted scammers: most often it will look like "Hey, that thing doesn't work..." - hoping you'll say "Ugh, just keep it, and I'll refund the money." I found that if you ask people to ship the item back, you'll generally get a message that says "Ooh! It started working again! Nevermind!"

One key on eBay: don't do a "Best Offer" option, 'cuz you'll never get your price. Just set a price and forget about it - it will eventually sell. Do take advantage of the Worldwide Shipping thing (where you send it to a drop spot, and they send it on from there) - half of my sales sell through that process. Generally, a great place to sell, but painful to deal with the kinds of sellers that live there. All-in-all... Grade: B-

And... what about Muffwiggler BST? Lots of sellers, very few buyers unless you are in fire-sale mode. Also, they stopped auto-pruning the listings, so don't be surprised if you occasionally get that "Hey, do you still have that Vermona QMI?" message about something you sold three years ago. I don't even bother to sell there anymore, and only go fishing as a buyer if I really want to bargain hunt. Grade: D

So there you have it - a graded scorecard. That's fun, right? And such good clickbait... 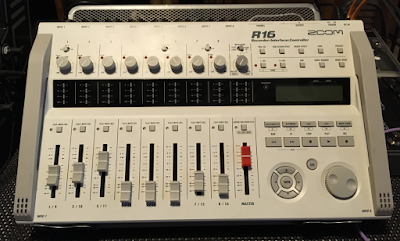 In the different approaches I tried for recording w/o computing, I gave the ol' Zoom R16 a try. It didn't really work for me, mainly because it had no viable (for me) sync function, and the split 8x8 mixing scheme ended up seeming like more work than it was worth. So I sold it off...

... and it came back. The new owner claimed that the inputs were scratchy (something that I'd never experienced), and I gave him his money back. I set the unit on the shelf and didn't give it a second thought. Last week I started cleaning my studio and clearing things that I don't use out the house. I thought "Well, I might as well figure out what is wrong..." and started experimenting. It turns out that everything is fine until you turned up the level on channel 5 - where it would start making all kinds of crappy noise. If you plugged a cable in and out a few times, it would quiet down, but it would start making noise again whenever you plugged anything into any of the other inputs.

That rang a bell for me, so I got out the tools and cracked 'er open. The R16 has an board specific to the back-panel jacks; it is connected to the main board with a number of flag plastic ribbon-like cables. I lifted up the board, reset all of these ribbons into their slotted receptacles, and bolted it back together.

And it works perfectly now.

Up for sale on eBay if you are in need. But it was a good reminder - internal cables are the locale of so many problems; always look to them as your first source of trouble.

An Ode to Roads


OK - there are some books that have to be read a page at a time, completely digested, then put into practice. That's what Mille Plateaux was, and that's where I am with this one. My second time through, and it's just as inspiring as the first time. Curtis keeps on nailing it. (It's really nice that it is now available in paperback, so much less expensive than it was...) 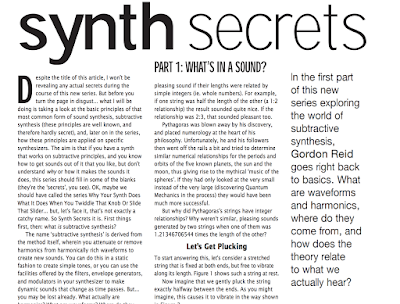 Someone just did some dirty work for us. The Synth Secrets series, one of the great bits of synth literature every produced, has been compiled into a single PDF file that is pretty perfect for hauling around on your iPad or something. I'm sure this isn't what Sound On Sound would prefer, but it's great to have, and you might want to grab it while the getting is good:

When the link doesn't work anymore, you'll be on your own...

I got a funny email today that told me this blog had been chosen as a Top 40 Synthesizer blog. Quite honored, I thought. So I went to the site (hoping against hope that it wasn't some sort of Russian pr0n site) and found that I had, in fact, cracked the top 40.

But it was kind of an interesting scroll; I'm sure most of those people (except for Mosher and the Synthtopia folks) had never heard of me - but I'd never heard of them, either. So it gave me something new to swirl around in, and I had a little fun with it.

So enjoy your time here on our Award Winning site, and check out the Feedspot Top 40 (erm, Top 36) synth blogs to add some spice to your life - sans Russian creepiness, I think! 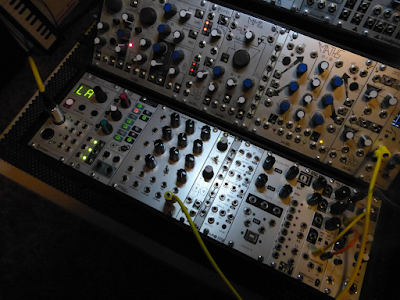 Maybe hard to tell in the sea of silver, but the Benjolin is seated in The Place Of Cool Shit, bottom row of the Station 252. Using it for an album project as we speak. Back to it now...


Tom Hall has come through with another SCW video, this time showing off some new options (like the Randomize and 2 Second Render) of the Single Cycle Waveform Editor while creating a tasty drone machine out of his Digitakt. Sounds so good...


Ever since I did the podcast interview with Rob Hordijk, I've been dying to have some of his gear in my little studio. I was working myself up into a lather over the Benjolin (particularly the pre-built one, available from my friends at CTRL-MOD) when I came across this video by Duplan.

This is what I've been working on patching, but it gobbled up most of the synth. Adding it (with just a little help, and a bit of processing) seemed like the kind of a thing that can help make a gig - or a session.

On the way. Oh dear.

Musicians in Studios getting Creative


Musician/producer Jamie Lidell is offering a glimpse into the amazing - chatting with other musicians and digging deep into their background and process. Sound familiar?

Jamie really brings an interesting view on the thing - from his long history with Warp records, to the amazing people that he interviews, these podcasts are chuck full of great information (and production tips, too). This week, Jamie is talking to Andrew Sarlo, and they end up talking a lot about A/R hellholes, productions mess-ups and Breklee school hacks. They also obviously dig each others work, and the result is a pretty amazing bit of work.

Love this podcast; available on Soundcloud and on Apple Podcasts. Check it out above!