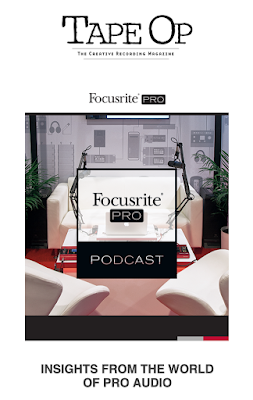 Well, here we go. Looks like it's time for a gold rush in podcasting. I've received an astounding number of "we'll help you monetize your podcast - no matter how small the listenership!!!" emails, and new audio-related podcasts are popping up on an almost-daily basis. For example, in the above image, we have Insights From The World of Pro Audio, brought to you by Focusrite (via Tape Op - hey, don't those guys hate digital?).

I doubt that the CEO of Focusrite is going to hang out with dudes from the local Guitar Center, and I'll bet that Jack White will somehow be involved. That's about all I can come up with.

I'm also sure that I'll listen to the first one, scratch my head, and move along. I don't think stuff like this has the 'Long Run' in mind at all: podcasting is the groove of the day, so AdMen say "Let's do it!" Something else tomorrow? "Let's pivot." It's simply not the kind of thing that sustains itself on a purely-commercial basis.

Wanna make a million dollars on a podcast? I don't know if that's even possible, but if it is, it probably involves getting the exclusive story of someone's murder, serializing it in a lurid way, then dripping it out as part of a major publicity campaign, probably somehow including a Kardashian in some way. It's not going to come about by talking about frequency response curves.

Maybe I just love the dusty corners of the internet - and I'm waiting for podcasting to become a dusty corner again. I still read several email newsletters, blogs, online magazine and other No Longer Sexy media. Soon podcasts will become No Longer Sexy as well. Then we will be back to dedicated (maybe obsessed???) people talking about the stuff they love to the small audience that really, really cares.

And the Make-A-Million folks will go back into real estate and cosmetics where they belong.