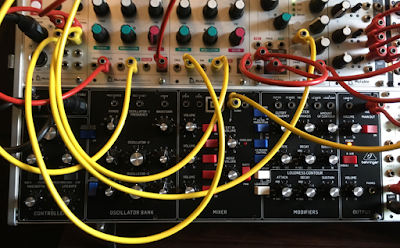 Maybe a little hard to tell what's going on there...

So I woke up after a crap night of half-sleep, and wanted to try something crazy - especially if it didn't look like work! So I decided this would be a perfect time to pull the Behringer Model D out of its rack-mount and install it as a Eurorack Uber-module!

As an aside, I really like the Model D - even though it's hip to not admit that it is cool. It fits the center section of my Output Platform desk quite nicely (with the rack ears I imported from England), has some nice additions to the typical Minimoog canon, and really sounds great. Why put it in the Eurorack? I wanted to see if I'd play with it differently, and I also just wanted to see how good of a job Behringer did with their Euro implementation.

It actually took longer to get the old modules out of the way than it did to install the Model D. Once I pulled the eight screws off (easily jeweler's screwdriver-able), it slid out of its case. I put on a 10-to-16 power cable, plugged it in and was flying high in a few minutes. This gave me a chance to see how it integrated with the rest of my studio system.

It was actually quite nice. While the Model D's MIDI implementation has some quirks (who designed that multi-trigger?), having both DIN and USB MIDI input was awesome. I could use the USB for MIDI from the computer, then take the DIN MIDI Thru to route data to the Mutable Yarns. I also quickly learned something fun: having the Model D set to MIDI Channel 1, then having the Yarns listen to channels 1 and 2, I could have channel 1 drive both the Model D and external modules (like one of my Braids).

And it was piping those digital oscillators into the warm-and-bouncy filter of the Model D that was a real payoff. Sounded so cool, I immediately burned off a nice hyper-sequenced track into Ableton Live, and set the stage for a nice releasable track. I also was using those cute Model D envelopes to do some parallel processing, which really drove the Mutable Veils in a nice way.

After all of that, is it going to stay in the rack? Hell no - it's already out of there! It was a fun experiment, but it also suffers from too few patch points and to much HP-hogging to be a long term solution for a small (7u) studio system. But it sure sounded cool, and it helped my get through a whole Saturday without working!