The End of a Friend

There have been a lot of post, messages and CTA's about the release of the Catalina version of Apple's OS X. Many of them suggest waiting for software to be updated to support the new version, or warn of impending copy protection issues - or whatever. But for some of us, Catalina represents the death of a generation of software.

For me, the issue is "M" - the algorithmic software created by David Zicarelli, originally for Intelligent Music, and still sold by Cycling '74 (my employer). We've been concerned about the trend of Apple slowly turning out the lights for historically relevant software, but Catalina - by killing off 32-bit apps and libraries like QuickDraw - eliminates a generation of software that defined digital media art.

M is a particularly important piece of computer music history. Over the years, I've had dozens of composers talk about the albums they created using M, or the jump start that its spartan interface had on getting them to embrace interactive-but-generative music creation. 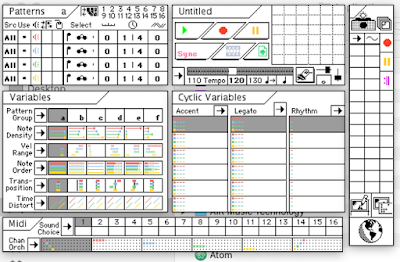 I guess I understand Apple's need to move on - but I wonder if this isn't another example of hubris on their part. They've always been happy to throw away the past, whether serial ports, FireWire, QuickTime, 32-bit software or even something as elemental as the QuickDraw graphics library. But it was also Apple that, back then, stated that QuickDraw was the optimal way to developer for the Mac. Might it not be useful to maintain some sort of compatibility?

I see people running age-old software on Windows 10, so it is clearly not impossible to do. I'm sure someone will say "Oh, there's so much extra cruft in Windows to support that old crap..." - but what about the cruft necessary to support the new crap? I never saw the screaming need for all the sausage needed to get the touchbar operational. Does anyone even know where their Apple Remote is - and if it still works? And let's make sure your Apple Watch can post your resting heart rate to Instagram or something. Pa-leese.

I might just be chuffed about this one because it directly affects me (because I always have a wonderful time when I play with M). I'm sure others would point to OS X and the death of Opcode Vision, or something else along the way. But I'm a bit broken-hearted about this one, and a little pissed off, too.